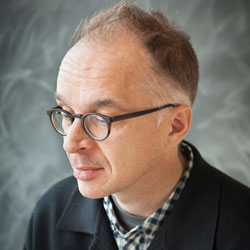 Waiting with an unfinished, finished look
behind honeysuckles that crown Old Saybrook,
she is reading Vita Sackville-West,
he has food on his moth-eaten sweater vest.
Here’s the Oriental rug, still steeped in piss
from their bulldog who barked like an activist.
She seems happy, reigning with creams you FedExed,
rubbing his scalp, patched with scabby flecks
(as his squamous-cell carcinomas sprout,
the local dermatologist cuts them out
or frosts the growths with liquid nitrogen).
Tonight they talk of their last vegetable garden,
count out their pills in chipped cereal bowls
(you know the ones), check their sugar levels,
bicker over books misplaced, tchotchkes
lost, their tongues like well-used church keys.
Brother, last night half the garden nearly froze.
The dash between their dates is nearly closed.