The poetry of Modernism was first and foremost an art of experiment, and not just in the sense of experimental form. The major poets of the early Twentieth Century performed experiments, on the page, not unlike Einstein’s famous “thought experiments.” The physicist imagined a train traveling at the speed of light, with a fly inside it moving forward at a much more leisurely pace, and the resultant theory was an intervention into reality that reshaped the world. The poets were out to understand what language is, and how we make meaning, and so Wallace Stevens investigated the nature the imagination, Gertrude Stein broke sentences to examine the ways syntax shaped consciousness, and T.S. Eliot tested the degree to which a poem could speak in a voice that belonged to no one. They set aside not just rhyme and meter, and the Victorian and Edwardian sentimentality they despised; they banished, to a large degree, psychology. The study of character and motivation, of the profound struggles of human beings to become themselves – this simply was not their focus.

The reclamation of psychology didn’t come until the 1950s, when Robert Lowell transformed the landscape in America and England with Life Studies, a groundbreaking book intent on studying the internal pressures that inform and distort us, in poems unafraid to examine whatever troubles the speaker – who is a version, of course, of Robert Lowell. This is not simply experience transcribed, but a work of high artifice, a performance in which, as the poet said, “I wanted the reader to feel that he was getting the ‘real’ Robert Lowell.”

At this moment an insidious term, “confessional poetry,” was born. It was a misnomer because Lowell was not seeking absolution but insight; these are less like monologues muttered to a priest than they are like probing, exploratory addresses to a therapist. Poets have been cudgeled with the term ever since, charged with self-indulgence – particularly if they happen to be women, or men who are willing to reveal their own vulnerability through engagement with aspects of experience that make us uncomfortable.

I’ve given you this capsule bit of American poetic history because the poet the Trustees of the Griffin Trust have chosen to honour tonight, Frank Bidart, is a psychological seer, a consummate student of human desire, obsession and shame, of what it is to be a soul that, as he has written, “learns once again the body it loves and hates is/ made of earth and will betray it.” Although he was a student and protégé of Lowell’s, his work seems sui generis; he sounds like no one else The formal properties of his poems are notably his own, placing words in white space with a deliberate gravity, using capitalization and punctuation to, as he has said, “fasten the voice to the page.” What he shares with Lowell is commitment is his commitment to the investigation of shadow country: the mysterious and troubled nature of what we used to call “the human heart” – longing, rage and envy, guilt and self-contempt, the allure of what we cannot have, the terror of being mortal. Bidart has turned that tired term “confessional poetry” inside out, and hung it up by its ears; his probing, searching poems are sometimes spoken by a version of the self, but he is also the most accomplished practitioner of the dramatic monologue in our time. These voices come from extremities of experience, from the edges of the imaginable, in voices dislocated by trauma. The child-murderer Herbert White looks down on his gathered victims in the woods by the side of the road; Ellen West, the subject of the first case study of an anorectic, punishes her body extravagantly for being a body, attempting to purify herself; someone like John Wayne Gacy hides the failures of the past by dragging them into the crawlspace beneath the house; the mind of Vaslav Nijinsky shatters as he takes on, in a kind of sacrificial self-immolation, the psychic weight of impending World War. In these riveting monologues, in his short lyrics, and in the great long poems centered on the dark hours of a night of the body and the spirit, Bidart seems fearless in his willingness to take on the difficult.

If I make Bidart’s work seem ferocious, that is because it is, written with an eye always on what is at stake, which is everything: how we are helpless, in the face of our longings, “fate embedded in the lineaments of desire/ (desire itself helplessly surrounded by what cannot be/ eluded, what/even the gods call GIVEN…)”

Therefore it may be surprising to hear that these poems are neither nihilistic nor utterly disconsolate, because Bidart believes that the nature of our species is to make, and that the necessary project of our being is to make something commensurate with the scale of our desire. These haunting, inescapable poems, gathered now in nine books of poems, with a collected volume on the way, represent an architecture built over a lifetime, out of necessity, a structure of insight and of radical empathy. Frank Bidart’s lifework is a rigorous affirmation of the ways art can – through the exactitude of naming and the forging of music – constitute a kind of self-redemption. 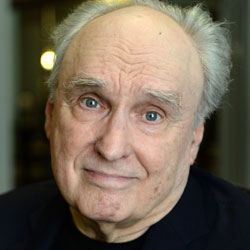 Widely acclaimed by both critics and readers as one of the most bracing and intense poets working today, Frank Bidart is the author of numerous collections of poetry, including, most recently, Metaphysical Dog (FSG, 2013), which won the 2013 National Book Critics Circle Award, the 2014 PEN/Voelcker Award, and was a finalist for the National Book Award. His other books include Watching the Spring Festival (FSG, 2008), Star Dust (FSG, 2005), Desire (FSG, 1997), a finalist for the Pulitzer Prize, and In the Western Night: Collected Poems 1965—90 (FSG, 1991). His many awards and honors include the Wallace Stevens Award, the Bollingen Prize, the Shelley Award from the Poetry Society of America, and The Paris Review’s first Bernard F. Conners Prize for The War of Vaslav Nijinsky in 1981. From 2003 to 2009, Bidart served as a chancellor of The Academy of American Poets.

About Bidart’s work, former U.S. Poet Laureate Louise Glück has said, “More fiercely, more obsessively, more profoundly than any poet since Berryman, Bidart explores individual guilt, the insoluble dilemma.” And The New York Times notes that Bidart “writes through passion, leaving out all but the statements that seem essential to the soul, the desire, the wisdom or the memory at hand.”

A friend of both Elizabeth Bishop and Robert Lowell, Bidart’s first books, Golden State and The Book of the Body, both published in the 1970s, gained critical attention and praise, but his reputation as a poet of uncompromising originality was made with The Sacrifice, published in 1983. Essential to that originality are Bidart’s trademark dramatic monologues — including poems written in the voices of dancers, victims of bulimia, and murderers — as well as his long, episodic “Hour of the Night” poems, of which he has published four so far in his lifetime.

Raised in California, Bidart attended the University of California—Riverside and Harvard University. In 2007, Bidart’s work was the subject of Fastening the Voice to the Page, a book-length discussion of Bidart’s work that features contributions from Elizabeth Bishop, Seamus Heaney, Donald Hall, Robert Lowell, Robert Pinsky, Louise Glück, and many others.