On June 5, 2014, Adélia Prado and her long-time translator Ellen Doré Watson entranced the crowd at the Griffin Poetry Prize awards evening with provocative selections from Prado’s work in Portuguese and English. 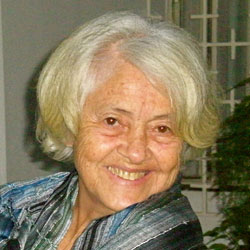 Adélia Luzia Prado de Freitas (Adélia Prado) was born and has lived all her life in the provincial, industrial city of Divinópolis, in Minas Gerais (General Mines), the state that has produced more presidents and poets than any other in Brazil. She was the only one in her family of laborers to see the ocean, to go to college, or to dream of writing a book. She attended the University of Divinópolis, earning degrees in Philosophy and Religious Education, and taught school until 1979. From 1983-1988 she served as Cultural Liaison for the City of Divinópolis. Prado is married to José de Freitas, and has five grown children.

A private writer and daydreamer since she was a girl, it was not until she was neatly forty that Prado began to think she might be writing something worthy of being called ‘literature,’ and sent a small sheaf of work off to poet and critic Affonso Romano de Sant’Anna. Sant’Anna, in turn, passed the poems along to Brazil’s great modernist, Carlos Drummond de Andrade, who pronounced them “phenomenal,” and hand-delivered them to his editor. Drummond subsequently announced in a newspaper column that St. Francis was dictating verses to a housewife in Minas Gerais, and her literary career was launched. Bagagem, her debut collection, was released soon after, followed by seven subsequent volumes of poetry, and seven of prose.

Despite ‘overnight’ and ongoing success, Prado mainly prefers to remain out of the limelight, only very occasionally traveling to Rio or São Paulo to participate in literary doings. And despite this relative ‘outsider’ status, she is recognized as one of the most important poets in Brazil.

Prado has been the subject of dozens of theses and dissertations, as well as a documentary film and countless articles, profiles, and interviews in newspapers, literary supplements, and popular magazines, and her work has been translated into Spanish, Italian, and English. In 2006, she was a huge hit as the featured reader at FLIP (Paraty International Literary Festival). A documentary and theatrical adaptations of Prado’s work have widened her readership and gained her popular acclaim. The one-woman show Dona Doida: Un Interlúdio (Mad Mrs: An Interlude) had a spectacular run in Rio de Janeiro starring Fernanda Montenegro, the grand-dame of Brazilian theatre, and toured throughout Brazil.

In 1998, when the National Library’s Jornal de Poesia polled intellectuals to compile the “List of Twenty” foremost living poets, she was ranked fourth. Since 1996, the Instituto Moreira Salles has been producing “Cadernos de Literature Brasileira” – coffee-table sized retrospectives of a writer’s work, complete with photographs, manuscript reproductions, critical essays, etc. Among the first to be so honored with one of these tribute volumes were João Cabral de Melo Neto and Jorge Amado. Prado was featured in 2000.