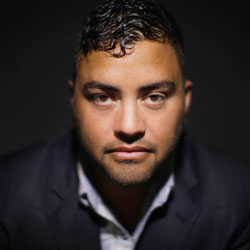 Entirely windless, today’s sea; of these waters’ many names
the best seemed “field-of-pearl-leaves,” for it smelled like the air
in the house he built entirely of doors: pink school door,
gold of the burnt hotel, two old church blues, the abandoned
bank’s steel doors singular and immovably wedged over
the family’s heads though as with everything corroding
the sense of themselves slipping away in the heat,
falling through the day’s brightness the way soldiers
once fell upon him walking home with a bucket of natural
water as he had been recalling the town square
before the tannery’s closing: he and his father shopping
on horseback in the noon Praça where they first saw
a man crouched under a black shroud, what his father called
a camera. His father forgot the incident immediately, but
for years the man asked whomever if they remembered
a camera, vegetable stalls, the butcher holder the cleaver,
a horseshoeing shop, purple berries, the long cassava valley haze,
fishnets, a few crab baskets and browning nets
drying by the ice cream shop, seven taverns,
a small, unused ferry terminal, a map on its wall outlining
the island in blue, the names Good Dispatch, Lover’s Bridge
pointed to by a mermaid of skin whiter than anyone
on this island of Angola’s descendants, her red hair.