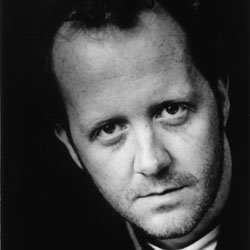 When we overwhelm a village,
I am told to make sure
none will ever pull a trigger.

I go in with a machete,
come out with a sack of hands.
My fathers feed me, count the pairs.

In the darkness I feel cool
palms crawl up to stroke
my head, soft hairless

hand-backs on my cheeks.
Thumbs draw down my eyelids,
fingers shush my lips.

In a terracotta jar,
a tobacco-brown plant,
tight as a mummified fist.

‘Leave it in the rain,
and see what happens.’
So we tipped it in the sink.

Amid the crockery
it unfurled and began to beg:
ever open, plaintive.

We kept it watered,
then, sick of supplication –
left it in the sun to clench.