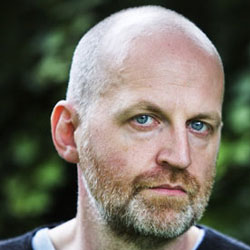 Once upon a time there was a book.
The book lay open to a page. The page
had a margin, and they shared a dirty look –
though the truth is they were practically engaged.
The page said roughly what it thought it should,
the margin said exactly what it wanted,
and all was grand. But one thing spoiled the mood
of the wee verge. ‘I’m so squished and tiny-fonted!
Why the hell should that guy hog the floor?
I’ll shove that silly bigmouth out the door!’
And soon the page was lying in the gutter.
Now it could weep and wail, and spit and splutter!
‘Time,’ the margin cried, ‘to make my mark!’
And suddenly it went completely dark.