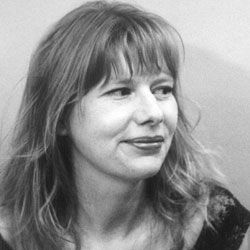 Jackfish and walleye circle like clouds as he strains
the silt floor of his pool, a lost lure in his lip,
Five of Diamonds, River Runt, Lazy Ike,
or a simple spoon, feeding
a slow disease of rust through his body’s quiet armour.
Kin to caviar, he’s an oily mudfish. Inedible.
Indelible. Ancient grunt of sea
in a warm prairie river, prehistory a third eye in his head.
He rests, and time passes as water and sand
through the long throat of him, in a hiss, as thoughts
of food. We take our guilts
to his valley and dump them in,
give him quicksilver to corrode his fins, weed killer,
gas oil mix, wrap him in poison arms.
Our bottom feeder,
sin-eater.

On an afternoon mean as a hook we hauled him
up to his nightmare of us and laughed
at his ugliness, soft sucker mouth opening,
closing on air that must have felt like ground glass,
left him to die with disdain
for what we could not consume.
And when he began to heave and thrash over yards of rock
to the water’s edge and, unbelievably, in,
we couldn’t hold him though we were teenaged
and bigger than everything. Could not contain
the old current he had for a mind, its pull,
and his body a muscle called river, called spawn.