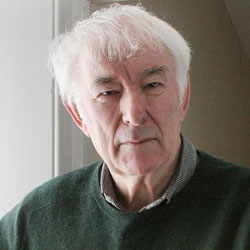 Once the driver wound a little handle
The destination names began to roll
Fast-forward in their panel, and everything

Came to life. Passengers
Flocked to the kerb like agitated rooks
Around a rookery, all go

But undecided. At which point the inspector
Who ruled the roost in bus station and bus
Separated and directed everybody

By calling not the names but the route numbers,
And so we scattered as instructed, me
For Route 110, Cookstown via Toome and Magherafelt.