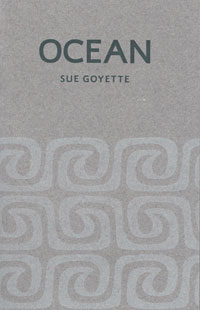 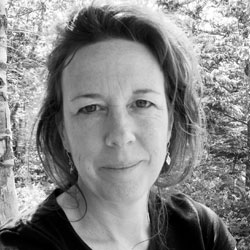 Sue Goyette has published three collections of poetry and a novel, Lures. She has won the Pat Lowther Memorial Award, the Atlantic Poetry Prize, the CBC Literary Prize for Poetry, the Earle Birney Prize, the Bliss Carman Award and has been shortlisted for the Governor General’s Literary Award. She lives in Halifax, Nova Scotia where she teaches creative writing and works part-time at the Writers’ Federation of Nova Scotia.

“Sue Goyette’s Ocean is a capacious and ambitious book in which she does no less than re-write the sea and the history of our relationship with it. The individual poems are numbered from one to fifty-six, not named, as is exactly right for the way the book itself ebbs and flows. In Ocean, Goyette becomes the spokesperson for a mythical community of shore-dwellers, with the third person ‘we’ in every poem bringing the strength of the collective to the viewpoint, and a refreshing sense of poetry as a communal force rather than an individual plaint. The ocean is its own character – or characters – a pet, a starlet, a dragon, a pacing old man. The poems explore the idea of its depth and surfaces, the fear of the under-ocean, the nature and origin of saltiness. But even though the sea is a constant – sometimes more present, sometimes less, a tidal flow within the poems – Goyette’s focus is on the shore. Her interest is in the moving boundary between ocean and land, where the shore-dwellers live. Here is a place of change and myth-making, where transformation happens every day. In Ocean, Goyette’s vigorous language and large vision create an extraordinary new history of the way the sea has formed human consciousness, shoreline experience and poetry itself.”

The ocean has never had a biographer quite like Sue Goyette. Living in the port city of Halifax, Goyette’s days are bounded by the substantial fact of the North Atlantic, both by its physical presence and by its metaphoric connotations. And like many of Life’s overwhelming facts, our awareness of the ocean’s importance and impact waxes and wanes as the ocean sometimes lurks in the background, sometimes imposes itself upon us, yet always, steadily, is. Goyette plunges in and swims well outside the buoys to craft a sort of alternate, apocryphal account of our relationship with the ocean. In these linked poems, Goyette’s offbeat cast of archetypes pronounce absurd explanations to both common and uncommon occurrences in a tone that is part cautionary tale, part creation myth and part urban legend. All the while the anthropomorphized ocean nibbles hungrily at the shoreline of our understanding, refusing to explain its moods and winning every staring contest. Ocean demonstrates how a spirited, playful and richly mythopoetic engagement with the world can actually strengthen our grasp on its bigger truths.

Tourism was great until the ocean went all coyote on us.
Lurking behind schoolyards, attacking people.

We were told to act big. To stand aggressively in our place.
Experts in animal control told us we had polluted its natural habitat

with our motored hands and greasy mayor. It had to feed further
afield and was too wild to mediate. The marriage counselors

suggested we do five random kind things for it on a weekly basis
until it trusted us again. Also, to show we were listening,

we were to “mirror” what it was saying. We gave that job
to the poets. Apparently, it was “a tired bus driver”

and “a wayward friend.” It was “the midnight of the death
of nights” and “the orphanage we’d been taken from.”

A fourth grade class made it their Spring Fling project.
With glitter glue and feathers, we were given murals

of how our life should look. We’d need more diving boards,
exploding rainbows and smiling dolphins/unicorns to achieve

any of it. The mothers of teenage boys elected themselves
to counsel. They wore wedge shoes and pink nail polish

and were either fiercely tired or determined to get supper on,
nodding while we explained how it sprawled its stuff everywhere.

How it stayed up until all hours of the night and gave us no
respect. Sound familiar, we asked. They leaned in as if over a map:

you are here, they said, manicured but in the trenches, trust us,
let go of any ideas of what you think it should be doing.

The following are links to other Web sites with information about poet Sue Goyette. (Note: All links to external Web sites open in a new browser window.)

Have you read Ocean by Sue Goyette? Add your comments to this page and let us know what you think.