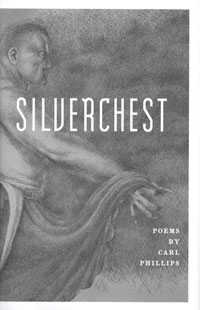 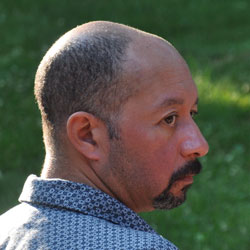 Carl Phillips is a graduate of Harvard University and the University of Massachusetts. He taught high school Latin for eight years and is the author of twelve books of poetry, including Speak Low (2009) that was a finalist for the National Book Award and Double Shadow (2011), also a finalist for the National Book Award and winner of the Los Angeles Times Book Prize. He has received numerous awards and honours, including the Kingsley Tufts Poetry Award, the Theodore Roethke Memorial Foundation Award in Poetry, a Lambda Book Award and the Thom Gunn Award for Best Gay Male Poetry, as well as fellowships from the Academy of American Poets, the American Academy of Arts and Letters, the Guggenheim Foundation, and the Library of Congress. Phillips was elected a Chancellor of the Academy of American Poets in 2006. He teaches at Washington University, in St. Louis, Missouri.

“Carl Phillips is a poet of the line and a poet of the sentence, both at once. Rubbing these two intangible structures – one musical, the other linguistic – against one another is an ancient way of kindling verbal and intellectual fire, and Phillips does it in poem after poem with casual mastery. The lines are carved in low relief, shaped by internal assonance, not by end-rhyme, while the sentences trace a perfectly grammatical yet occasionally dizzying switchback trail, using the standard resources of prose to climb far beyond the prosaic domain. Phillips’s Silverchest consists in large part of reflections on a love affair gone bad. It is a gay male love affair in this case, but the anguish, the self-doubt, the sense of abandonment and loss, are captured here with a tenderness, depth, and precision that can dance through sociocultural fences as easily as deer can dance across the grass. Silverchest speaks, as great books do, out of its own profound particularity, to and for something wordless and shared by us all.”

In Silverchest, his twelfth book, Carl Phillips considers how our fears and excesses, the damage we cause both to others and to ourselves, intention and not, can lead not only to a kind of wisdom but also to renewal, maybe even joy, if we’re willing to commit fully to a life in which ‘I love you / means what, exactly?’ In poems shot through with his signature mix of eros, restless energy and moral scrutiny, Phillips argues for the particular courage it takes to look at the self squarely – not with judgment but with understanding – and extend that self more honestly toward others. It’s a risk, there’s a lot to lose, but if it’s true that ‘we’ll drown anyway – why not / in color?’.

Unafraid is what we were, I think, and then afraid,
though it mostly seemed otherwise. I opened my eyes,
I saw, I closed, I shut them.
The usual morning glories
twist up through banks of gone-wild-by-now holly;
crickets for song, morphos for their glamour, which
is quiet – blue, and quiet …

You: the dark that nothing, not even the light, displaces.
You, who have been the single leaf that
won’t stop tossing,
among the others.
For you.

The following are links to other Web sites with information about poet Carl Phillips. (Note: All links to external Web sites open in a new browser window.)

Have you read Silverchest by Carl Phillips? Add your comments to this page and let us know what you think.