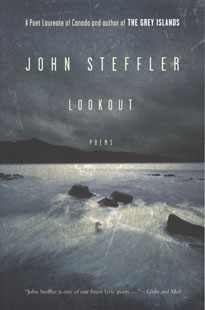 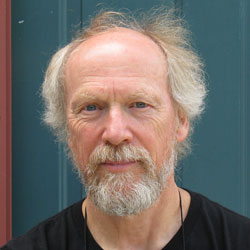 John Steffler was the Parliamentary Poet Laureate of Canada from 2006 to 2008. His previous books of poetry include The Grey Islands, That Night We Were Ravenous, winner of the Atlantic Poetry Prize, and Helix: New and Selected Poems, winner of the Newfoundland and Labrador Poetry Prize. Steffler is also the author of the award-winning novel The Afterlife of George Cartwright.

“The playful spontaneity that enlivens John Steffler’s Lookout moves through the poems like wind, revealing both their flexibility and their sturdiness. With a passionate naturalist’s trained and ever-curious eye, Steffler is interested in what happens both in and out of sight. In language that ranges from affable story-telling to tough, spare, startling lyrics, he probes the complex collisions between Nature and humankind without inflicting upon his subject any of the ecological ranting, self-dramatizing grief, or faux-mysticism that infects so much contemporary ‘nature poetry.’ Modest, plainspoken, and unsentimental in stance, his poems are at the same time untethered to the literal, which allows for sudden and unnerving swerves, poems that decisively and unpredictably break the membrane between realms, as when a vole with ‘a laugh like a snowplow’s blade’ begins to speak, or rifts appear in a loved one’s memory, allowing reality and fantasy, past and present, to dissolve into one another. Steffler’s quality of attention is so fierce and so assured that we trust it to lead us into new and often unsettling territory. In Lookout, his masterful inter-leaving of physical, philosophical, and psychological worlds entices us into a dream of wakefulness we recognize as our own.”

The poems in John Steffler’s new collection are enlivened by the same muscular acts of attention that characterize his earlier books. As always, his poems inhabit experience fully, senses on high alert, transmitting the abundance and turbulence of physical existence; they are charged with the raw Eros of being. Nowhere – not in Canada nor in the world at large – is there a more complete nature poet: attuned, robust, honest, fully informal, and emotionally candid, brimming with energy and animal spirits.

Beating the Bounds, by John Steffler

When I was six years old, my parents,
along with other adults who’d never spoken
to me, came laughing and acting silly,
picking me up, giggling, “Now we’ll show
you a house you didn’t know about.”
“A big house.”
“A secret house you knew about all the time.”
So I was frightened, seeing how serious
it was that they were so strange,
although I was probably smiling,
and they carried me and other children my age
to the river and said, “Here is the marble
floor,” and put my bare legs in the fast
place between stones and it was colder
than I remembered it and the tugging of dark
cold water became my legs, the Fox Island
River became my legs – afterwards when I
was falling asleep or sometimes just walking
along, the bottom of me would be moving away
like that – and they carried me, tickling me,
singing ridiculous songs among rough
brown stones up a valley past caribou
where it was cold and held me up on top
of their palms so I faced the sky and someone
with fat fingers that smelled of sheep held
my eyes open until the cold air and white
sky burned and were too bright and my eyes
brimmed like two cuts and I felt those cuts
go right into my name and they said,
“This is the roof up here, you can’t go
higher than this,” and that wind and sky
were my eyes then, they were in my name,
and the people pushed me through a patch
of alders and a patch of spruce the wind
had bent, saying, “Here’s a young cub
we’ll take home and raise,” and “Push him in front
so we won’t get scratched,” and my skin
was crisscrossed with cuts, so I felt
those branches, smelled the alder musk,
the sharp edge of spruce like a coast,
a burning fringe, a noise around me holding
me in and they said, “This is the west
wall of the house you live in, remember
it,” and the day went on like that, they
pushed me against a cliff to the north
so I felt its jaggedness in my spine,
they sat me in black soupy peat and said,
“Here is your bed, it is nighttime,” they
took me down to the sea and made me
drink it and told me that was the south
and the kitchen, “the garden,” someone
laughed and give me a capelin to eat, rubbed
scales on my face, the backs of my hands
and “Over there,” they said, meaning
over the hills across the gulf, “that is not
your house and the people who live there
are strangers to you, not enemies if
you deal with them properly.” “They
speak a language of farts,” someone said,
“they gobble like turkeys when they fuck,”
and although my body was made of all
it had touched that day and my ears were full
of my parents’ voices and the voices
of their friends, in my heart I was still
frightened and felt like a stranger among them.

The following are links to other Web sites with information about poet John Steffler. (Note: All links to external Web sites open in a new browser window.)

Have you read Lookout by John Steffler? Add your comments to this page and let us know what you think.