On June 3, 2008, the distinguished poet Ko Un was honoured with The Griffin Trust for Excellence in Poetry’s Lifetime Recognition Award.

Trustee Robert Hass paid tribute to Ko Un and Scott Griffin presented him with his award.

Upon acceptance of the award, Ko Un said a few appropriately poetic words, read in English by Robert Hass:

On June 4th, Ko Un took to the podium during the awards ceremony, and shared some more of his thoughts and works with an enraptured crowd. 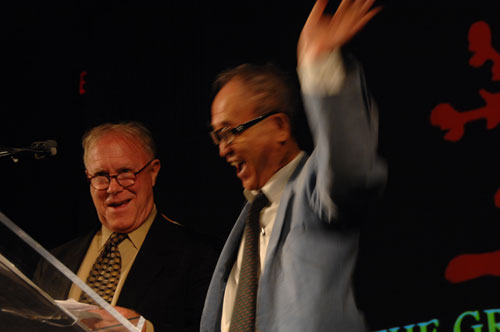 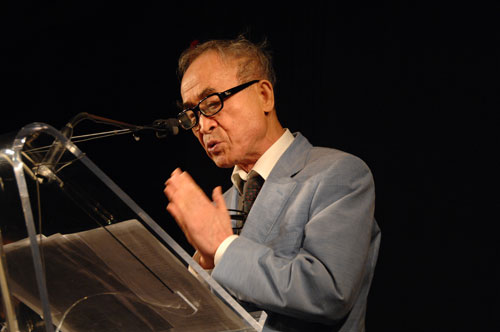 I’ll read you two little songs from my poetry collection, Flowers of a Moment.

1. At sunset.
One wish:
to become a wolf under the fat full moon.

2. Going down
I saw the flower
that I hadn’t seen going up.

Here is a place for living poets, therefore I would like to read “Time with Dead Poets”:

We are in one region of the universe,
sometimes a merciless wilderness,
sometimes a womb.
Here each of us
is not just an individual living poet.
Here we living poets have been changed
into something else, an unfamiliar backcountry.

No sound passes beyond the boundaries of extinction.
Our bodies sometimes feel heavy,
sometimes lighter than our hearts.
The souls of dead poets
have entered each of our bodies,
folded their weary wings, made their abode. We grow heavy.
I am more than myself.
You are more than yourselves.
We sing in the universe’s dialect,
in the new mother-tongue of dead poets.
We began alone
then we came together. Our burdens are light.

As waves in huge columns exploded aloft, swirling madly,
then, next morning, settled again,
as gulls emerged from hiding, terror ended,
no longer trembling,
went soaring aloft, drawing the most refined circles,
one died.
A poet, someone whispered.

At times, a day was as long as a slowly evolving intestine;
at times, a day was short like a newly-born baby gull’s wings.
Because the dead poet’s remaining lifetime had settled
at the heart of each of our lives born of the egg myth.

In the void above high plateaux at 5000 meters
a dry, gaunt Tibetan gull is flying.
A very, very long time ago,
a continent came rushing near, collided.
Then the area that had been once a sparkling sea
turned into the Himalayas.
The gulls lost their ocean.
They cried aloud.
These gulls must be second-generation, twelfth generation, if not 1302nd …
A next time comes.
A next time comes.
Their cries finally became songs, became poems.

So each of us
is a living poet.
And not only individual living poets
but three poets, seven poets, eleven, in this world and the world after.
We are the very sensuality
of the time in which we come and go.
Now the memorials we make for other souls
are one with the memorial someone else will make for each of us.
Our meeting here
is bound to leave scenes of multiple separations and deaths
in many places, not only here.

Here it is!
in our backcountry there is a lake. Amazing.
On the water’s surface, before and after we close our eyes,
a white water lily is floating.
Wretched is the poet who has never written an elegy.
We must sometimes shoulder that wretchedness
and write a new elegy.
That is another name for a love song. A flower.
Yes! we need sorrow.
The lake remembers its ancient sea. 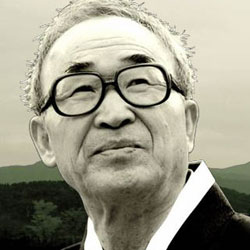 Ko Un is generally acknowledged to be Korea’s foremost contemporary writer. He is at the same time a poet, an essayist, a novelist, a translator, and a literary critic, with an immense literary achievement consisting of more than 130 books. Still, he says he has more to write in the years to come than he has written so far.

Ko Un was born in 1933 in Kunsan, Chollabuk-do. He began to write poems at an early age. During the horrors of the Korean War (1950-1953) he went through a mental breakdown and made his first attempt at suicide, which was followed by another four attempts over the next 20 years. Before the end of the war he joined a Buddhist monastery and became a monk. For the next decade he practised intense Zen meditation and traveled throughout the country. In 1957 he founded the “Buddhist Newspaper” and began to publish poems, essays, and novels. In 1962, being already widely known as a poet and having served as head monk of several major temples, he left the Buddhist community after publishing a “Resignation Manifesto”.

During the period 1963-1966 he isolated himself in Cheju Island, founding a charity school, teaching Korean and art, writing most beautiful symbolist poems and suffering from severe insomnia and alcohol abuse. In 1967-1973, now back in Seoul, while dedicating himself thoroughly to nihilism, he produced many works. In 1973 he was awakened to the reality of his country by the self-immolation of an uneducated laborer and became engaged in political and social activities opposing the military regime, also joining the struggle for human rights and the labour movement.

After the formation of the Association of Writers for Practical Freedom in 1974, he became its first secretary general. During 1974-1982 he was, many times and for long periods, persecuted by KCIA with arrests, house arrests, detentions, tortures, and imprisonments. In 1980 he was sentenced to 30 years imprisonment. After serving two and a half years, he was set free in a general pardon.

In 1983 he married Sang-Wha Lee, a professor of English literature, at the age of 50, and settled in Ansong, south of Seoul. Two years later their daughter was born. With his marriage began a time of productivity unparalleled in the history of Korean literature – one critic has called it an “explosion of poetry” – in which a seven-volume epic Mountain Paekdu, many volumes of Ten Thousand Lives, a five-volume autobiography, and numerous volumes of poems, essays, and novels poured out. He is often called “The Ko Uns” instead of “Ko Un” by literary critics because of his incredible activity, a volcano of productivity. “He writes poetry as he breathes,” a literary critic once said. “Perhaps he breathes his poems before putting them to paper. I can imagine that his poems spring forth from his enchanting breath rather than from his pen.”

Ko Un was elected Chairman of the Association of the Writers for National Literature and honoured as a resident professor of the graduate school, Kyong-gi University. He was a visiting research scholar at the Yenching Institute of Harvard University and the University of California, Berkeley. He has received many prestigious literary awards in Korea, his books have been translated into more than 15 Asian and European languages, and he has been acclaimed as one of the most important poets of the world. He is now a visiting professor at Seoul National University and the President of the Compilation Committee of the Grand Inter-Korean Dictionary.

Ko Un has written far more than any other Korean poet, and manifested an immense diversity – epigrams of a couple of lines; long discursive poems; epic; pastoral; and even a genre of poems he has himself created, of which Maninbo (Ten Thousand Lives) is the main example, termed popular-historical poetry. He once said that if the quantity of his works did not guarantee the quality of his works he would immediately stop writing.

In the foreword to his poetry collection Sea Diamond Mountain, he says of his sense of poetic creation: “If someone opens my grave a few years after my death, they will find it full, not of my bones, but of poems written in that tomb’s darkness … Am I too attached to poetry? Because my poems exist side-by-side with a farewell to poetry, my attachment is one aspect of a deliverance from poetry.”

Poet and peer Robert Hass, who has worked with Ko Un, says: “he is a remarkable poet and one of the heroes of human freedom in this half century, a religious poet who got tangled by accident in the terrible accidents of modern history. But he is somebody who has been equal to the task, a feat rare among human beings.”

A complete list of Ko’s honours as well as his work is available at http://www.koun.co.kr