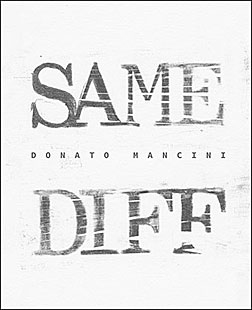 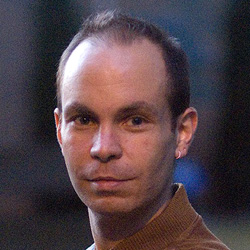 The interdisciplinary practice of Donato Mancini focuses mainly on poetry, bookworks, text-based visual art and cultural criticism. His books and chapbooks include Snowline (2015), Loitersack (2014), Buffet World (2011), Fact ‘N’ Value (2011), Hell Passport no.22 (2008), Æthel (2007), 58 Free Coffees (2006), and Ligatures (2005). Ligatures and Æthel were each nominated for the ReLit Poetry Award, and Ligatures received honourable mention in the Alcuin Society book design awards. Mancini’s published critical writing includes work on the archive, time, and memory in Anamnesia: Unforgetting (2011), and a discourse analysis of poetry reviews in You Must Work Harder to Write Poetry of Excellence (2012). He holds a Ph.D. in English from the University of British Columbia.

“Donato Mancini’s Same Diff crosses pre-existing texts with a strong design impulse to assemble a work of unusual beauty, resonance, and timelessness. In “Snowline,” a famous French phrase about snow is translated over centuries; translations snow down the pages until the original phrase is buried; they fall through different hands until they turn from snow into a meditation on time. Mancini’s primary methods are curatorial (he assembles), orchestral (he co-ordinates), mechanical (he repeats), and archaeological (he excavates language rather than the world for his materials). He fractures words to let out their yolk. Same Diff is a monument to Mancini’s accomplishments: he uses the words of others without appropriation; he negotiates self-effacement, humility, and invisibility; he offers a way to recover a self, not through self-assertion, but by attending to the voices and needs of others. What belongs to any of us? Even Mancini’s words never seem to be his. He is a custodian of language who returns it to us cleaned.”

you aren’t going to like what i have to say

before i start i want to say you shouldn’t blame yourself
there’s no point in beating around the bush
there’s something we need to talk about
this is the most difficult thing i’ve ever had to tell anyone
the longer i wait the harder it’s going to be
it’s best if we face this right now
what i’m about to tell you won’t be easy to hear
i know this will hurt but it has to be said
i don’t like being the bearer of bad news
please sit down, this could come as a shock
you knew this was coming, right?
i hope this won’t be a complete surprise
hate to break it to you
please don’t kill the messenger
i have some really bad news
how do i even say this
this is really really hard for me
there are no words for what i have to tell you
i can’t go on lying anymore
you aren’t going to like what i have to say

The following are links to other Web sites with information about poet Donato Mancini.

Have you read Same Diff by Donato Mancini? Add your comments to this page and let us know what you think.