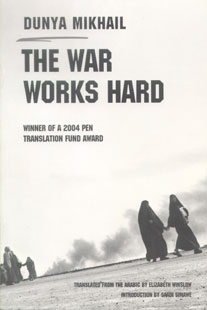 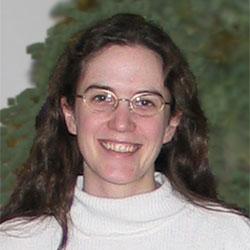 Elizabeth Winslow is a fiction writer and a graduate of the Iowa Writers’ Workshop. Her translation of Dunya Mikhail’s The War Works Hard won the PEN prize for translation in 2004 and was published by New Directions in 2005.

She has had other translated poems published in Modern Poetry in Translation, Poetry International, Words Without Borders, Circumference and World Literature Today and short stories or non-fiction published in Phoebe, Blue Mesa Review, Louisville Review and Variety. 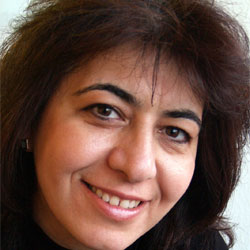 Born in Iraq in 1965, Dunya Mikhail worked as Literary Editor for The Baghdad Observer. Facing increasing threats and harassment from the Iraqi authorities for her writings, she fled Iraq in the late 1990s and studied Near Eastern Studies at Wayne State University. In 2001, she was awarded the UN Human Rights Award for Freedom of Writing. Mikhail has published four collections of poetry in Arabic (she speaks and writes in Arabic, Aramaic, and English), and one lyrical multi-genre text, The Diary of a Wave Outside the Sea. She currently lives in Michigan.

“We know that Dunya Mikhail was raised in Saddam’s Iraq and sent into exile to follow the news of its devastation from afar. So the very first line of The War Works Hard comes as a surprise: ‘What good luck!’ The second line crystallizes both the contemporary reality and Mikhail’s sensibility: ‘She has found his bones.’ In her poems, war is a monstrous fact of ordinary life, and her particular skill is the invention of unadorned images that capture the often unexpected human responses. Brecht wrote, ‘We’d all be human if we could,’ and Mikhail, despite all the contrary evidence, shows that we can, and sometimes are. These are political poems without political rhetoric, Arabic poems without Arabic poetical flourishes, an exile’s letter with neither nostalgia nor self-pity, an excavation of the ruins of her homeland where the Sumerian goddess Inana is followed on the next page by the little American devil Lynndie England. In Elizabeth Winslow’s perfect translations, poetry takes on its ancient function of restoring meaning to the language. Here is the war in Iraq in English without a single lie.”

How magnificent the war is!
How eager
and efficient!
Early in the morning,
it wakes up the sirens
and dispatches ambulances
to various places,
swings corpses through the air,
rolls stretchers to the wounded,
summons rain
from the eyes of mothers,
digs into the earth
dislodging many things
from under the ruins …
Some are lifeless and glistening,
others are pale and still throbbing …
It produces the most questions
in the minds of children,
entertains the gods
by shooting fireworks and missiles
into the sky,
sows mines in the fields
and reaps punctures and blisters,
urges families to emigrate,
stands beside the clergymen
as they curse the devil
(poor devil, he remains
with one hand in the searing fire) …
The war continues working, day and night.
It inspires tyrants
to deliver long speeches,
awards medals to generals
and themes to poets.
It contributes to the industry
of artificial limbs,
provides foods for flies,
adds pages to the history books,
achieves equality
between killer and killed,
teaches lovers to write letters,
accustoms young women to waiting,
fills the newspapers
with articles and pictures,
builds new houses
for the orphans,
invigorates the coffin makers,
gives grave diggers
a pat on the back
and paints a smile on the leader’s face.
The war works with unparalleled diligence!
Yet no one gives it
a word of praise.

The following are links to other Web sites with information about Elizabeth Winslow and Dunya Mikhail. (Note: All links to external Web sites open in a new browser window.)

Have you read The War Works Hard by Elizabeth Winslow translating Dunya Mikhail? Add your comments to this page and let us know what you think.