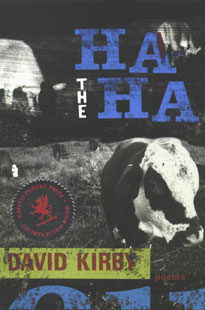 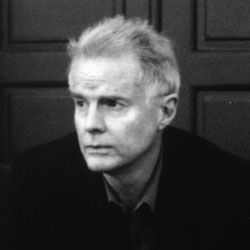 David Kirby has received many honors for his work, including the Brittingham Prize in Poetry and citations in Best American Poetry 2000 and 2001, and Pushcart Prize XXV. He has been awarded a Guggenheim Fellowship and grants from the National Endowment for the Arts and Florida Arts Council. Kirby is the author or co-author of twenty-two books, including the poetry collections The Ha-Ha, The House of Blue Light, and The Traveling Library in addition to a collection of essays, What Is a Book? His most recent volume, The House on Boulevard St.: New and Selected Poems, is shortlisted for the National Book Award. His verse has appeared in such publications as the Kenyon Review, Southern Review, and Ploughshares. A member of the National Book Critics Circle, Kirby also writes regularly for the New York Times Book Review, the Atlanta Journal-Constitution, and the San Francisco Chronicle.

“David Kirby’s illusionistic poetics are like a ha-ha, – which is not a joke but a landscape trick – used to keep cows at a picturesque distance from the manor house. The formal appearance of this poet’s stanzaic patterns – so chaste and well-behaved and structurally deft – support the genial but disruptive spirit of these narrative performances. Talk, talk, talk about travel, food, more food, art, architecture, Barbara, more Barbara, mother, nuns, Rotarians, Americans, more Americans, etc., little operas with recitative. The Ha-Ha is funny and sad, colloquial and learned, and full of wry self-observation and social profundities. The poems are accompanied here and there by photographs of a large cow who is not laughing.”

Borges at the Northside Rotary, by David Kirby

Borges at the Northside Rotary

If in the following pages there is some successful verse or other, may the reader forgive me the audacity of having written it before him.
– Jorge Luis Borges, foreword to his first book of poems

After they go to the podium and turn in their Happy Bucks
and recite the Pledge of Allegiance
and the Four Truths (“Is it the Truth?
Is it fair to all concerned? Will it build goodwill
and better friendships? Will it be beneficial
to all concerned?”), I get up to read my poetry.

and when I’m finished, one Rotarian expresses
understandable confusion at exactly what it is
I’m doing and wants to know what poetry is, exactly,
so I tell him that when most nonpoets think
of the word “poetry,” they think of “lyric poetry,”
not “narrative poetry,” whereas what I’m doing

is “narrative poetry” of the kind performed
by, not that I am in any way comparing myself
to them, Homer, Dante, and Milton,
and he’s liking this, he’s smiling and nodding,
and when I finish my little speech,
he shouts, “Thank you, Doctor! Thank you

for educating us!” And for the purposes
of this poem, he will be known hereafter
as the Nice Rotarian. But now while I was reading,
there was this other Rotarian who kept talking
all the time, just jacked his jaw right through
the poet’s presentations of some of the finest

vers libre available to today’s listening audience,
and he shall be known hereafter as the Loud Rotarian.
Nice Rotarian, Loud Rotarian: it’s kind of like Good Cop,
Bad Cop or God the Father, Mary the Mother.
Buy Low, Sell High. Win Some, Lose Some.
Comme Ci, Comme Ça. Half Empty, Half Full.

But in a sense the Loud Rotarian was the honest one;
he didn’t like my poetry and said so – not in so many words,
but in the words he used to his tablemates
as he spoke of his golf game or theirs
or the weather or the market or, most likely,
some good deed that he was the spearchucker on,

the poobah, the mucky-muck, the head honcho,
for one thing I learned very quickly
was that Rotarians are absolutely nuts
over good deeds and send doctors to Africa
and take handicapped kids on fishing trips
and just generally either do all sorts of hands-on

projects themselves or else raise a ton of money
so they can get somebody else to do it for them,
whereas virtually every poet I know, myself included,
spends his time either trying to get a line right
or else feeling sorry for himself and maybe writing a check
once a year to the United Way if the United Way’s lucky.

The Nice Rotarian was probably just agreeing with me,
just swapping the geese and fish of his words
with the bright mirrors and pretty beads of mine,
for how queer it is to be understood by someone
on the subject of anything, given that,
as Norman O. Brown says, the meaning of things

is not in the things themselves but between them,
as it surely was that time those kids scared us so bad
in Paris: Barbara and I had got on the wrong train, see,
and when it stopped, it wasn’t at the station
two blocks from our apartment but one
that was twenty miles outside of the city,

and we looked for someone to tell us how
to get back, but the trains had pretty much stopped
for the evening, and then out of the dark
swaggered four Tunisian teenagers,
and as three of them circled us, the fourth
stepped up and asked the universal ice-breaker,

dans le nord de – And here the Tunisian kid
mimes a quarterback passing and says, Ah,
l’université avec la bonne equipe de futbol!
He was a fan of FSU sports, of all things
so we talked football for a while, and then
he told us where to go for the last train.

Change one little thing in my life or theirs
and they or I could have been either the Loud Rotarian
or the Nice one, and so I say to Rotarians everywhere,
please forgive me,
my brothers, for what I have done to you
and to myself as well,

for circumstances so influence us
that it is more than an accident
than anything else that you are listening to me
and not the other way around,
and therefore I beg your forgiveness, my friends,
if I wrote this poem before you did.

The following are links to other Web sites with information about poet David Kirby. (Note: All links to external Web sites open in a new browser window.)

Have you read The Ha-Ha by David Kirby? Add your comments to this page and let us know what you think.