TORONTO – Wednesday, October 11, 2017 – Romanian poet, essayist, and political figure Ana Blandiana will be honoured with The Griffin Trust For Excellence In Poetry’s Lifetime Recognition Award at the 2018 Griffin Poetry Prize Shortlist Readings on June 6, 2018. Ana will be attending the events in Toronto, and will read at the Griffin Poetry Prize Awards Evening on June 7, 2018. 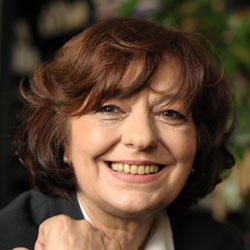 Ana Blandiana, born in 1942 in Timisoara, is one of the most highly acclaimed contemporary Romanian poets. She has published fourteen books of poetry, two books of short stories, seven books of essays and one novel. Her work has been translated into twenty-six languages and collected in forty-seven books of poetry and prose to date.

A prominent opponent of the Ceausescu regime, her daring, outspoken poems, along with her courageous attitude in the defense of ethical values, has made her a legendary figure in Romanian literature. She suffered various reprisals and prohibitions under two Communist dictatorships, and three bans on her writing (1959-64, 1985, 1988-89). Over the years, her works have become symbols of an ethical consciousness that refuses to be silenced by a totalitarian government.

Blandiana was co-founder and president of the Civic Alliance from 1990, an independent non-political organisation that fought for freedom and democratic change. She also re-founded and became president of the Romanian PEN Club, and in 1993, under the aegis of the European Community, she created the Memorial for the Victims of Communism, a research centre for historical studies. Blandiana was awarded the highest distinction of the French Republic, the Légion d’Honneur (2009), and the US State Department acknowledged her with the Romanian Women of Courage Award (2014). Blandiana was awarded the European Poet of Freedom Prize (2016), for her book of poems My Native Land A4.

In English, an anthology of Blandiana’s poems, The Hour of Sand, was published by Anvil Press (UK) in 1990. A selection of her poems translated by Seamus Heaney appeared in the anthology, When the Tunnels Meet, ed. John Farleigh (Bloodaxe 1996). Her most recent collection of poetry, My Native Land A4, (Bloodaxe 2014) translated by Paul Scott Derrick and Viorica Patea will be followed by The Sun of Hereafter & Ebb of the Senses (2017).

About The Griffin Trust For Excellence In Poetry
The Griffin Trust was founded in April 2000 by Chairman Scott Griffin, along with Trustees Margaret Atwood, Robert Hass, Michael Ondaatje, Robin Robertson, and David Young. In 2004 Carolyn Forché was named a Trustee and joined the list of internationally acclaimed writers who sit on the board of the Griffin Trust. In 2014, Karen Solie, Colm Tóibín and Mark Doty were named Trustees, and in 2016, Jo Shapcott and Marek Kazmierski were named Trustees. Margaret Atwood, Robert Hass, Robin Robertson and Colm Tóibín have assumed the role of Trustees Emeriti.