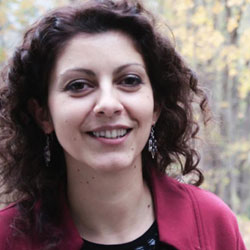 One of the few things my mother saved was a doll.
It was the same height as my six-year-old self,
with the same grey-coloured eyes, brown hair,
the same fear of the dark
and drawn to it.
‘Don’t touch her!’ I was told.
‘I have nothing else to sell if we go broke!’
Until the day I secretly stole her
and broke her heel by accident.
It was worth nothing now. No capital.
And then it became mine.

I met you one day in May—
pure blue sky with sparse white clouds on the horizon
and nothing more, as if tiny drawings in a biscuit box
made to look tasty to angels and not humans.
What could I do to own such a day
except give it a hard kick in the heel?

For Achilles, the heel would be meaningless
if he hadn’t had to choose between glory and a happy life.
Happiness is anonymous, a face without features.
it belongs to no one. But glory, yes. Even to this day
he drags it behind him – his one and only divine defect.

And the motherland? If there weren’t a cracked pane
of glass between us, and ethereal wound, an undeniable
physical reality no matter the side that bleeds,
I would doubt such a place even exists.

We do everything we can to own life –
‘my life,’ ‘your life’ –
when in fact, the opposite happens.
Life needs more than a heel to fasten you to itself;
it hits you hard on the neck
and spits you into two, with no time for wonder.
So one day, you find yourself
exhibited in two separate museums at once.

At this very moment, I cannot be sure
which part of me is speaking to you
and which part the guide’s
commenting on and pointing to.