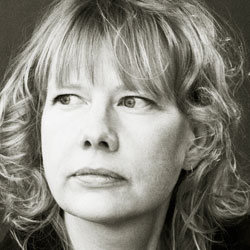 Above, blue darkens as it thins to an airlessness wheeling
with sparkling American junk
and magnetic brains of astronauts. We are flung
across our seats like pelts.

Some of us are eating small sandwiches.
Some of us have taken pills and are swallowing
glass after glass of gin.

We were never intended to view the curve of the earth

so they give us televisions, a film
about a man and his daughter who teach a flock
of Canada geese to fly.

Wind shear hates the sky and everything in it,
slices at right angles across the grain of currents
like a cross-cut saw.

We have fuel, fire, Starbuck’s coffee, finite
possibilities of machinery. A pilot with human hands
and nothing for us to do, turbulence being to air
what hope is to breathing.
A property.

Far below, a light comes on in the kitchen of a farmyard
turning with its piece of the world into shadow.
Someone can’t sleep

an engine noise falls around the house like snow, vapour trails
pulled apart by frontal systems locked overhead
since high school. Imagines
alien weathers that unfurl in time zones
beyond the horizon.