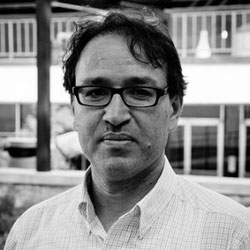 A salute to Jacques Berque

I imagine his voice as the sound of a tambourine,
that the tambourine is broken in his throat,
that his throat is a fire named God.

I imagine a poet
into whose innards history pours
drenching his words and pooling at his feet,
a poet who rains blood that some hoist as a banner made of sky.