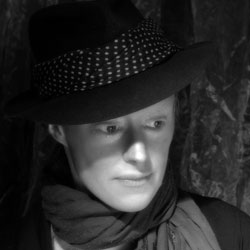 These stones speak a level language
murmured word by word
a speech pocked and porous with loss
and the slow hungers of weathering.

And there, in the broken choir, children
are all raised voice, loving the play of outline
and absence where the dissembled god
has shared his shape and homed us.

At the end of the nave, the east front stands
both altered and unchanged,
its arch like a glottal stop.

And what comes across, half-said
into all that space, is that it’s enough
to love the air we move through.