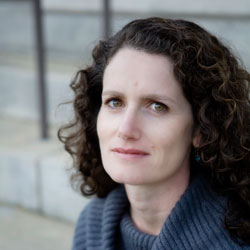 When I began to write, I didn’t know
who would be waiting for it. In the window,
a curtain hangs unmoved, a mess spreads on the floor:
loose change, CDs, an unmade bed, the entrails

of night. Signs of a struggle, deserted.
Someone left traces on these cups, this carpet,
someone bled out from self-inflicted wounds,
signed his name backwards, backwards. At this mirror,

a face, a face bit someone, a world leapt
from the other side, whole, identical
but in reverse. It occupied the best
places tonight and settled back to rest,

and no one sees it’s false. Winter comes slowly,
frost pricks the window, pricks it and draws blood.