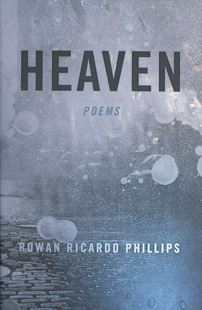 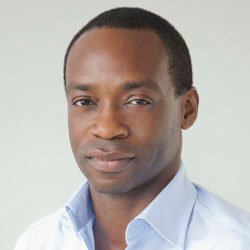 Rowan Ricardo Phillips is the author of Heaven (2015) and The Ground(2012). He is the recipient of a Whiting Writers’ Award, the PEN/Joyce Osterweil Award, the GLCA New Writers Award for Poetry, and a Guggenheim Fellowship. He lives in New York City.

“Rowan Ricardo Phillips’ second collection of poems pushes off from his debut, The Ground, by looking out and off toward the many Heavens we find in our midst: the heaven of the natural world, large and silent and sublime; the heaven of ecstatic language and lyric possibility; the heavens of memory and of love; the flawed, finite, deeply familiar heaven of 21st Century. In poems of exquisite craft, rich allusion and nimble intelligence, Phillips creates a gathering ground for glimmers of Homer and Shakespeare, Frost and Stevens. But he casts a wide net, also making surprising use of sources as unlikely as the Wu Tang Clan and Mel Gibson, and as chastening as the recent preponderance of shootings that have left unarmed blacks dead and their assailants deemed ‘Not Guilty.’ This is a book that manages to make something indelible of what we’ve wrought and lost, and of what we are still desperate to decipher – the truth we’ll only know from learning to ‘squint in its direction and poke.'”

“Who the hell’s heaven is this?” Rowan Ricardo Phillips offers many answers, and none at all, in Heaven. Swerving elegantly from humour to heartache, from the beatitudes of Malibu to the beats of the Wu-Tang Clan, from knowledge to ignorance to awe, Phillips turns his gaze upward and outward to face the beyond. Meditating on feverish boyhood, on the Kingdom of Heaven as an excuse for mayhem, on a dead rooster by the side of the road in Ohio, on “Alpenglow ripening the mountain peaks / Into rose-pink pyramids steeped in clouds,” his language remains eternally intoxicating, full of play, pathos and surprise.

We’d cut school like knives through butter, the three
Of us – Peter, Stephen and I – to play
Just about all the music we knew,
Which meant that from nine in the morning till
Steve’s parents, the ever-patient Murtaughs,
Would get home from work, I played guitar,
Peter played bass, and Steve (who’d end
Up becoming a guitarist by trade
When we went separate ways, to separate
Schools, in separate states), Steve at this point
Played the drums. We dreamed of power trios
And powered our way through song after song,
Including ones Steve and I wrote – like
“Hey, Regina” and the lamentably
Titled “String Her Up.” Sometimes we tried out
Some Yes, a long “Hey Joe,” the stereo phaser
Was my signature sound, and I’d bend in
And out of notes, imply arpeggios
Only to solo over them, tapped, frowned
Through anything in a major key, felt
My way home on Steve’s map of snares, Pete’s rope.
We’d play an entire Zeppelin album,
Usually the first or second, then stray
By chance into the longer, later songs
Like bees that float down and drown in a pool.
We’d break for lunch and then get back at it,
As though we had a gig to get ready for,
Or a demo to cut, the cassette deck
Rolling its eyes as it whirred round and round.
Peter, as is the nature of bassists,
Held the tunes together and kept things light.
Years later, I assumed he was dead.
My Telecaster glares at me at night now
From inside the hard case by my bed –
And the calluses on my fingertips
Have long since softened. The six-minute solos
At some point became poems it took two months
Minimum to make seem seamless. Steve
In the meantime thrived in the Triangle,
Became Stevie, married Emily; Pete
I knew less about. He posts on Facebook
Cheerfully about the Light, the Great Light
That glows in all of us, sends the occasional
White dove in the occasional shared shot,
A sun resting on a cloud like a pearl
In its mooted gray shell. Nostalgia courts
Me. I’m nearing forty, we were boys –
And I should let us be. But nostalgia
Spreads quickly through the ashes of our youth,
Making ferned fires out of blue beliefs.
When the dark would come, we’d show each other
Our blisters, the painful white whorls peeling,
Our red palms upwards, outstretched and unread.

The following are links to other Web sites with information about poet Rowan Ricardo Phillips. (Note: All links to external Web sites open in a new browser window.)

Have you read Heaven by Rowan Ricardo Phillips? Add your comments to this page and let us know what you think.