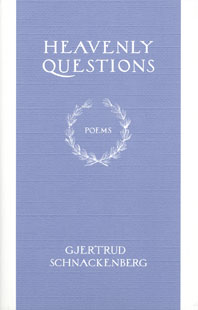 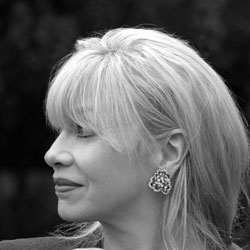 Gjertrud Schnackenberg was born in Tacoma, Washington, in 1953. The Throne of Labdacus (2000) received the Los Angeles Times Book Prize in Poetry.

“Throughout her career, Gjertrud Schnackenberg has been widely admired for her elegant, inventive, and musically complex prosody, her emotional decorum, and her timeless frames of reference. Heavenly Questions is a book that has all of these qualities, yet moves far beyond them. Its six long poems tell a story of epic scale, creating a world large enough to contain Classical and Buddhist mythologies, a personal human drama of rare power, and the mathematics of physical existence (among many other things) while making them seem like entirely natural neighbors. This magic comes to us in a great upheaval of brilliant prosodic rule-breaking and reinvention. Describing these poems as blank verse heavily enriched by rhyme does not begin to describe the power of their formal realization. Reading this book is like reading the ocean, its swells and furrows, its secrets fleetingly revealed and then blown away in gusts of foam and spray or folded back into nothing but water. Heavenly Questions demands that we come face to face with matters of mortal importance, and it does so in a wildly original music that is passionate, transporting, and heart-rending.”

Heavenly Questions, the first new collection of poems from Gjertrud Schnackenberg since her critically acclaimed The Throne of Labdacus, finds her at the height of her talents and showcases her continued growth as an artist. In six long poems, Schnackenberg’s rhyme-rich blank verse, with its densely packed images, shifts effortlessly between the lyric and the epic, setting passion to a verbal music that is recognizably her own. An exceptional and moving new collection from one of the most talented American poets of our time, Heavenly Questions is a work of intellectual, aesthetic, and technical innovation – and, more than that, a deeply compassionate and strikingly personal work.

A visit to the shores of lullabies,
So far from here, so very far away,
A floor of sand, it doesn’t matter where,
And overhead a water-ceiling sways;
A shell is summoned to materialize –
The holy life, a spiral, hushed and pure,
Complete unto itself – a spiral shell
Is summoned from a substratum of wonder:
And all is well now, hush now, close your eyes,
Around a primal, ragged nucleus
Accumulated layers crystallize:

An embryonic seashell pulls itself
Through being-portals intricately placed
In seas of non-existence; caught; self-caught
In nets of pasts-and-futures synchronized
In present-nows: the Many and the One –

It doesn’t matter, really, how it’s done,
The how of it; the why; it doesn’t know
How atoms in the ancient paradox
Can pass from unseen particles to seen

Or why a chain of atoms interlocks
And manifests in blurry pink and green;
It doesn’t matter really, where it’s from –
Descended from an ancient nacre-dream,
Self-fabricating through genetic codes
Without an archetype to utilize,
As if the wondrous deed it’s summoned to
Were all that ever mattered, seam by seam
Volutions from a nacre-nucleus
Of violet iridescence: being-whorl
With everything in play, and all in play,
And all is well now, hush now, close your eyes –

A shell appears – Fusiturricula –
And uses its inherited clairvoyance
To plot a logarithmic spiral round
An axis of rotation evermore
And evermore-forevermore unseen,
Through pre-existing numbers, one-two-three,

And shyly browsing algae as it ponders
Angular momentum; symmetry;
Successively self-generating curves
Projecting helixes, the axis fixed;
Then tilting on its axis; torsion-tilt;
Compulsion and desire mixed with toil;
An overhanging cusp becomes a spire
By pushing up and forward on the coil:

Irregularly oscillating whorls
Are flaring out in ruffled calcium;

Pure rhythmia;
Slow motion suturings,
With no one there to sew them, perforate
The apex, boring through: a water-vent,
Inhalant and exhalant;
knotted threads
Are pulled to fasten equidistant nodes
Along a helix-rim;
a clockwise twist
And twirling stripes through interrupted bands
Are darkly lit, through brilliant whites and creams,
Like lightning bolts in violet-tinted brown
That zigzag in slow motion, down and down
From node to node to node; a lightning dream
Descending ridge by ridge:
Sensation: Fizz –
Salt water circulating past and through
The ruffled aperture – existence is
A taste of ocean water on a tongue –

And then Fusiturricula, intent
On browsing, sets in motion moving veils
Of sands that long ago and far away
Were magma rocks with twisted veins of ore
From which the sand was ground and empty shells
Like lightning-stricken spires, surface-fused
With used-up bolts of lightning, lie around –

Nacreous, in almost-silence, hushed
Among the lulling engines of the sea –

But hush now, close your eyes now, all is well:
Underwater ink enlarges, blurs,
In violet-brown across a spiral shell:
A record of volution fills a scroll
With wondrous deeds and great accomplishings,
A record of a summons not refused:

Of logarithms visible and fused
With thoughts in rows of spiral beaded cords
As X goes to infinity; impearled;
Violet; and inviolate; self-endowed;

And in the aperture, the remnants of
A Heavenly Question, lightly brushed across
With opalescent ore of consciousness:
The universe is where? Is hanging where?

And overhead a water-ceiling sways,
And all is done in play; in heaven above

The ceiling of the sea is drawing streams
Of shining answers through its question-sieves:
Is matter the enchanted lathe? Or mind?
But which one spirals from the other’s blade?

And all the waves at the beginning-end
Of all that comes and goes and takes and gives
And all in play and all that dies and lives
Materializes; dematerializes;
Five, and four, and three, and two, and one –
And all is brought to being; all effaced;

And all that could be done has now been done;
And all is well and hush now, never mind;
Fusiturricula slowly withdraws
Its being; self-enfolding; self-enclosed;
And all it toiled for turns out to be
No matter – nothing much – nothing at all –
Merely the realm where “being” was confined
And what was evanescent evanesced;

And then a spiral shell washed by a wave
Is carried forward in a foaming crest;
But that was long ago and far away,
It doesn’t matter, really, when it was,
And close your eyes now, hush now, all is well,
And far from here, so very far away,

A wave sets down an empty spiral shell
And draws away, it doesn’t matter where,
Among the other waves that come and go,
And other waves appear and disappear
And hush now, all is well, and far from here

All heaven and earth appear; and evanesce;
A self-engulfing spiral, ridge by ridge,
That disappears in waves that come and go
And all that could be done is done; and seven;
And six; and five; and four; and three; and two;
And one – and disappearing – far away –
Enraptured to the end, and all in play,
A spiral slowly turns itself in heaven.

The following are links to other Web sites with information about poet Gjertrud Schnackenberg. (Note: All links to external Web sites open in a new browser window.)

Have you read Heavenly Questions by Gjertrud Schnackenberg? Add your comments to this page and let us know what you think.