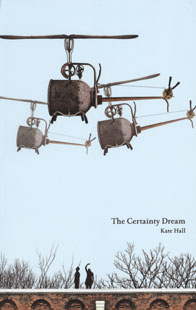 Kate Hall’s poems have appeared in many journals, including The Colorado Review, jubilant, Swerve, The Denver Quarterly, Open City, Verse, LIT and the Boston Review. She has won the Irving Layton Award and the David McKeen Award and travelled on the storied Wave Books poetry bus tour in 2006. She was co-editor of the delirium Press chapbooks and co-hosted the Departure Reading Series in Montreal, where she now lives and teaches at McGill University.

“We Canadians are an earnest people and we make earnest books. I have done so myself. But every so often in the midst of crafting a particularly earnest sentence I’m struck by that Oscar Wilde feeling – ‘either the wallpaper goes or I do.’ There should be an award, I’ve thought on these occasions, for a person who, from within the confines of our grand funny country, can treat the topics of life, dreams, death, winter and animals without earnestness. Kate Hall’s book is called The Certainty Dream and it has what appear to be three homemade helicopters on the cover. The helicopters are in fact oil cans lashed to egg beaters and are held together by the good hopes of two tiny humans waving at them from the lower margin of the cover. It is a summary image of Kate Hall’s method and mood. What holds a poem together, what holds a dream together, is the mind of some person working within it to make sense, using the available means. Her means include lots of philosophers’ names and sparkly bits of their thought, but these are not decoratively invoked, they are woven into the sense that she makes and the mood in which she makes it. I like the feeling her poems give that as we read them we are amidst an actual process of thought. And that this process takes place, as she says, in ‘the gigantic margin reserved for wrong guesses.'”

In Kate Hall’s bracingly immediate, insistently idiosyncratic debut collection, The Certainty Dream, a mynah bird perches in poems but ‘stands for nightingale’; the poet’s antelope turns transparent; she dresses up her orange trees with bark and leaves. As the dream world and the waking world blur, the body and the dimensions it inhabits become a series of overlapping circles, all acting as containers for both knowledge and uncertainty. At times disarmingly plainspoken, at others, singing with lyric possibility, these poems make huge associative leaps. Taken together, they present the argument that to truly ‘know’ something, one must first recognize its traces in something else.

If I were to sleep, it would be on an iron bed,
bolted to the floor in a bomb-proof concrete room
with twelve locks on the door.
I wouldn’t ask for a mattress
or decorate. I wouldn’t ask for beautiful.
I’d let the philosophers in,
but not into my bed.
They’d arrive cradling their brass instruments.
I might let them play
but only very softly and only if
they didn’t fight or sing.

From The Certainty Dream, by Kate Hall
Copyright © Kate Hall, 2009

The following are links to other Web sites with information about poet Kate Hall. (Note: All links to external Web sites open in a new browser window.)

Have you read The Certainty Dream by Kate Hall? Add your comments to this page and let us know what you think.