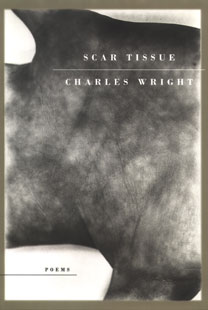 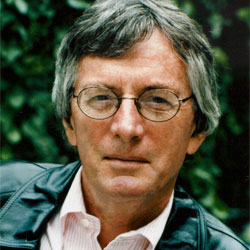 In 2013, Wright won the prestigious Bollingen Prize for American Poetry for Bye-and-Bye: Selected Late Poems. In 2014, Wright was named Poet Laureate of the United States.

“‘At the heart of every poem is a journey of discovery. Something is being found out,’ Charles Wright has written. In his poems, the same old world we look at every day without seeing it, be it a tree in the yard, the bird in that tree, the branch swaying after the bird has flown, is the subject of endless interest. For Wright, reality is not stable; it changes with the seasons and has to be rediscovered again and again. ‘I write out my charms and spells / against the passage of light / and gathering evil,’ he writes in his new book. The mind in the act of finding what will suffice in the face of one’s own mortality is Wright’s inexhaustible theme. His spiritual and philosophical problem is that he is a ‘God-fearing agnostic’ sure only of his need to question everything. What makes his poems memorable is his seemingly inexhaustible ability to see things with new eyes. In Scar Tissue, as in his other books, he is a poet of great originality and beauty.”

In his new collection, Charles Wright investigates the tenuous relationship between description and actuality – “thing is not an image” – but also reaffirms the project of attempting to describe, to capture the natural world and the beings in it, although he reminds us that landscape is not his subject matter but his technique: that language was always his subject – language and “the ghost of god.” And in the dolomites, the clouds, stars, wind, and water that populate these poems, “something un-ordinary persists.” – Booklist

Charles Wright reads The Woodpecker Pecks, but the Hole Does Not Appear

The Woodpecker Pecks, but the Hole Does Not Appear, by Charles Wright

The Woodpecker Pecks, but the Hole Does Not Appear

It’s hard to imagine how unremembered we all become,
How quickly all that we’ve done
Is unremembered and unforgiven,
how quickly
Bog lilies and yellow clover flashlight our footfalls,
How quickly and finally the landscape subsumes us,
And everything that we are becomes what we are not.

This is not new, the orange finch
And the yellow and dun finch
picking the dry clay politely,
The grasses asleep in their green slips
Before the noon can roust them,
The sweet oblivion of the everyday
like a warm waistcoat
Over the cold and endless body of memory.

Cloud-scarce Montana morning.
July, with its blue cheeks puffed out like a putto on an ancient map,
Huffing the wind down from the northwest corner of things,
Tweets on the evergreen stumps,
swallows treading the air,
The ravens hawking from tree to tree, not you, not you,
Is all that the world allows, and all one could wish for.

The following are links to other Web sites with information about poet Charles Wright. (Note: All links to external Web sites open in a new browser window.)

Have you read Scar Tissue by Charles Wright? Add your comments to this page and let us know what you think.