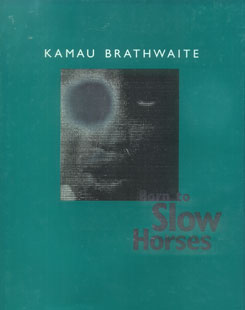 Click here to learn more about #40NightsoftheVoice, a special tribute to Kamau Brathwaite 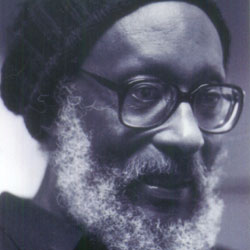 Kamau Brathwaite, born in Barbados in 1930, is an internationally celebrated poet, performer, and cultural theorist. Co-founder of the Caribbean Artists Movement, he was educated at Pembroke College, Cambridge and has a PhD from the University of Sussex in the UK. He has served on the board of directors of UNESCO’s History of Mankind project since 1979, and as cultural advisor to the government of Barbados from 1975-1979 and again since 1990. Brathwaite has received numerous awards, among them the Neustadt International Prize for Literature, the Bussa Award, the Casa de las Américas Prize, and the Charity Randall Prize for Performance and Written Poetry. He has received Guggenheim and Fulbright fellowships, among many others. His book, The Zea Mexican Diary (1992) was The Village Voice Book of the Year. Brathwaite has authored many works, including Middle Passages (1994), Ancestors (2001) and The Development of Creole Society, 1770-1820 (2005).

Over the years, he has worked in the Ministry of Education in Ghana and taught at the University of the West Indies, Southern Illinois University, the University of Nairobi, Boston University, Holy Cross College, Yale University and was a visiting fellow at Harvard University. Brathwaite is currently a professor of comparative literature at New York University. He divides his time between CowPastor, Barbados and New York City.

We were saddened to learn of Kamau Brathwaite’s passing in February, 2020. As tributes pour in acknowledging Brathwaite, his work and his accomplishments, Barbados Today offers these moving reflections.

“To read Kamau Brathwaite is to enter into an entire world of human histories and natural histories, beautiful landscapes and their destruction, children’s street songs, high lyricism, court documents, personal letters, literary criticism, sacred rites, eroticism and violence, the dead and the undead, confession and reportage. An epic of one man (containing multitudes) in the African diaspora, Brathwaite’s world even has its own orthography and typography, demanding total attention to the poem, forbidding casual glances. Born to Slow Horses is a major book from a major poet. Here political realities turn into musical complexities, voices overlap, history becomes mythology, spirits appear in photographs. And, in it what may well be the first enduring poem on the disaster of 9/11, Manhattan becomes another island in the poet’s personal archipelago, as the sounds of Coleman Hawkins transform into the words and witnesses and survivors. Throughout Born to Slow Horses, as in his earlier books, Brathwaite has invented a new linguistic music for subject matter that is all his own.”

on the first day
of yr death it is quiet it is dormant like a doormat
no one-foot touch its welcome. its dust on the floor
is not disturb nor are the sleeping spirits of this house

on the second day
of yr death. i break a small

i can still smell the sweet flour of yr firstborn flesh

on the third day
of yr death. the water in my urine turn to blood
i cover the waterfront of the mirror w/a blue cloth where yr face stood

on the fourth day
yu shd be rising. knocking at the door of
darkness. coming back to me

i do not hear yr call

on the fifth day
after yr death. a young white rooster. white white white feathery & shining tail & tall
neigbour of sound from miles away in the next village
stands in the yard & from his red crown crows & crows & will not go away

on the sixth day
after yr death. there is this silence of flowers
their petals say their shining needs
soft water needs

i see them once again inside the chapel of my funeral

on the seventh day
after yr death. the yellow flour
in the cup-cakes in the kitchen have gone sour

the mad dogs of the pasture kill the cock & pillage
it. madwoman wind is scattering white screaming feathers’ petals’ pedals over all
the brunt and burnin ochre-colour land

on this tenth day
i haffe go down to the Station today to find out
what they doin about yr det. about the ‘accident’
dem call it. bout the black-hearted man who a-kill

yu. an whe dem hide yu body
and po. lice who dealin w/ this case they cannot look me in the lips
and No One kno

whe the boy is or gone or when he will come-back
ten time dis ten dem mek me up & down & book & fourt
to fine my sun. an ten ten time dem ave no ansa for me for me for me

in dis dry-weatha tunda
dem seh because i poor & have no book to haul-out
inside dis station. an i inn got no song

to sing becau i colour in dis Marcus Garvey country proud an strong
an wrong – yu sun gone out & still you colour wrong.
inn got no i say song

now i will haffe doubt if god is good & black & honesty
wha good good do fe me?
whe god dat cricket midnight criminal when Mark of god get call like dat & kill
Mark cyaan dead so if good. if god

my breath give birt to good like god
my sun dis gold is all my riches that cannot be replace
an suddenly me cannot fine him in dis place before dis good god face to face
wha good fe god. no god. what good. wha god. no god
if good Mark have no face to face dis god inside dis good god place

on the eleventh day after he dead
[Silence]

on the twelfth day
after yr debt – o pickney – it is as if me cyaan wake up
Time has been drain from all my clocks. the sky is overcyas & lock
altho it isn’t rainin yet

this night we hold our wake. watch w/ the spirit of my sum before his daily funeral
• people cook food bring bread & drink & there’s some singing
of the old traditions by the older folks & country citizens

From Born to Slow Horses
Copyright © 2005 by Kamau Brathwaite

Kamau Brathwaite has left us all an extensive and generous inheritance. His work reaches back to our collective past. He tended to that in his role as historian and cultural critic but he was also never afraid of innovation.

Beginning on the occasion of his 90th born day (May 11), we honour his gifts for 40 nights (May 11th-June 19th). We have invited writers and scholars to share in the spirit of the word and give voice to portions of his incredible body of work. We hope that this collective celebration will serve both as commemoration of his legacy and a way to commune together during this time of quarantine.

Brathwaite was a pioneer in imagining collective futures, communities of the word and new literary forms. He wrote of our mythic and submerged histories, re-imagined island geographies, theoretically innovated Caribbean studies, aesthetically contributed to Caribbean language, voice, text, and carved out a space for Caribbean literature and studies to grow collectively.

Brathwaite also connected us in diaspora and his work became a space of encounter for all of us. It helped us to think about who we are and to understand the forces that brought us to different places around the world.

We felt that Kamau Brathwaite would appreciate the significance of the number 40. The etymological root of quarantine is 40 (quaranta). ‘Forty days night’ is also one of our Caribbean mourning traditions. The timing of this celebration and remembrance will not only mark his day of birth but will also carry us into the spirit of Juneteenth (June 19th — Emancipation Day in the United States). Together we will share in the emancipatory power of his words, in a slow release over 40 nights.

life & death shall here be voice.

Please follow us on twitter @Kamauremix for a new video released nightly, 6pm (EST) or 7pm (EDT). We kick off with a video from the NGC Bocas Lit Fest, featuring a reading of Brathwaite’s poem “Wake” by thirteen writers and scholars, released at the festival website, bocaslitfest.com. The first week of 40 Nights of the Voice will also feature readings by: M. NourbeSe Philip, Kwame Dawes, Rinaldo Walcott, Dionne Brand, Christina Sharpe and Opal Palmer Adisa.

We also invite you to join us by uploading your own videos. Please share widely with the hashtags: #KamauBrathwaite #40nightsofTheVoice.

The following are links to other Web sites with information about poet Kamau Brathwaite. (Note: All links to external Web sites open in a new browser window.)

Have you read Born to Slow Horses by Kamau Brathwaite? Add your comments to this page and let us know what you think.