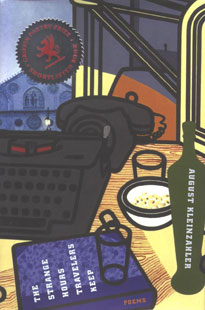 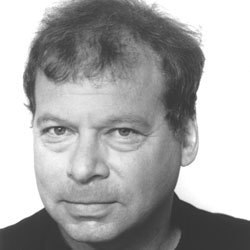 August Kleinzahler published his first book of poetry, A Calendar of Airs, in 1978. Since then, he has published six others, including Storm over Hackensack (1985); Earthquake Weather (1989); Red Sauce Whiskey and Snow (1995); and Green Sees Things in Waves (1998). In 2000, Farrar, Straus & Giroux published Live from the Hong Kong Nile Club: Poems 1975-1990. His poems have appeared in numerous publications including The New Yorker, The American Poetry Review, Poetry, Harper’s Magazine, Grand Street, The Threepenny Review, and The Paris Review. A native of Jersey City, Kleinzahler is the recipient of awards from the John Simon Guggenheim Foundation (1989), the Lila Acheson-Reader’s Digest Award for Poetry (1991), and an Academy Award in Literature from the American Academy of Arts and Letters (1996). In 2000 he was awarded a Berlin Prize Fellowship. His latest book, a collection of meditations entitled Cutty, One Rock: Low Characters and Strange Places, Gently Explained, was published in November, 2004 to considerable critical acclaim. He has also been named poet laureate of his hometown of Fort Lee, New Jersey.

Kleinzahler has been a taxi driver, a locksmith, a logger, and a building manager. He has taught creative writing courses at Brown University, the University of California at Berkeley, and the Iowa Writers’ Workshop, as well as to homeless veterans in the Bay Area. He lives in San Francisco.

“The Strange Hours Travelers Keep is a masterful collection of work from a poet who inhabits the energies of urban life more fully than anyone currently writing. If August Kleinzahler’s poems notice birdsong, they do so by their own account as ‘part of a mix – footsteps, traffic, / fountains, shouts’. There is something exhilarating about passages of verse which are so ferociously on the move, between locations, between forms, between registers. These poems swagger and swerve and sing, while their moments of grace are ruthlessly sudden and just as swiftly abandoned to all the other stuff that’s happening in the universe. Kleinzahler’s poems also talk a lot about music, and they themselves live in the miraculous, conditional way that music does – finding their harmonies by moving forward.”

The Tartar Swept, by August Kleinzahler

The Tartar swept across the plain

In their furs and silk panties

Forcing the snowy passes of the Carpathians

Arraying their host in a vasty wheel

Turning, turning at the Jenuye’s command

Until it explodes, columns of horsemen

Peeling away in all the four directions

Hard across the puszta

Dust from their hooves darkening the sky

They fall upon village and town

And leaving them senseless in puddles of goaty drool

Ripping the ears off hussars and pissing in the wounds

They for whom the back of a horse

Is their only country

And a city, ptuh, a city

A pullulating sore that exists to be scourged

On shield and cuirass

And the yellow loess from the dunes of the Takla Makan

And the Corridor of Kansu

Between their toes and caught in their scalps

With news of the steppes, the lagoons and Bitter Lakes

The smoke of chronicles

Finding their way by the upper reaches

Of the Selinga and the Irtysh

To Issyk-Kul, the Aral, and then the Caspian

Vanquishing the Bashkirs and Alans

By their speed outstripping rumor

From whose backs arrows are expertly dispatched

As fast as they can be pulled from the quiver

More violent in every destruction

This race of men which had never before been seen

With their roving fierceness

From beyond the edge of Scythia

From beyond the frozen ocean

Pouring out of the Caucasus

Surpassing every extreme of ferocity

From the Don to the Dniester

The Black Sea to the Pripet Marshes

Then dicking the help

These wanton boys of nature

Who shot forward like a bolt from on high

All that they could come to grips with

In their wild career

Thousands advancing at the wave of a scarf

Then doubling back or making a turn

With their diabolical sallies and feints

Remorseless and in poor humor

So they arrived at the gates of Christendom

From The Strange Hours Travelers Keep, by August Kleinzahler
Copyright © 2003

The following are links to other Web sites with information about poet August Kleinzahler. (Note: All links to external Web sites open in a new browser window.)

Have you read The Strange Hours Travelers Keep by August Kleinzahler? Add your comments to this page and let us know what you think.