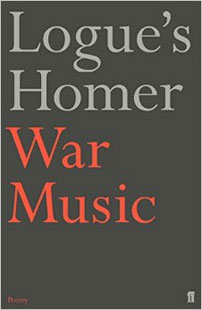 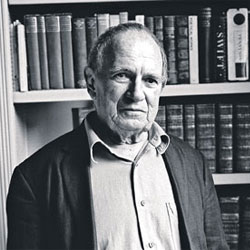 Christopher Logue’s War Music: An Account of Books 16-19 of Homer’s Iliad brought him great critical acclaim when it appeared in 1988. Kings: An Account of Books 1 to 2 of Homer’s Iliad was published in 1991 and was awarded the Bernard F. O’Connor Award by the Paris Review. The Husbands: An Account of Books 3 and 4, the third volume in the treatment of Homer’s Iliad, was published by Faber in 1994. Selected Poems by Christopher Logue was published in 1996 and his autobiography, Prince Charming, was published by Faber in 1999. Born in England, Logue served as a Private in the Black Watch and spent 16 months in an army prison. He worked in films, appeared in Ken Russell’s Dante’s Inferno and The Devils in addition to writing the screenplay for Russell’s Savage Messiah. He also appeared in John Irvin’s The Peasant’s Revolt. He published his first volume of poems in 1953 and has contributed his ‘True Stories’ column to Private Eye. His most recent volume, Cold Calls: War Music Continued, won the 2005 Whitbread award for poetry. In 2007, Logue was honoured by the Queen with a CBE (Commander of the Most Excellent Order of the British Empire) for his services to literature. Logue has also written for the theatre and cinema, and once penned a pornographic novel under the pseudonym Count Palmiro Vicarion.

Christopher Logue died on December 3, 2011, leaving his wife, biographer and critic Rosemary Hill. The Guardian offered this tribute to his colourful life and respected work.

“Christopher Logue is one of those all too rare poets whose ability to tell the story transforms each word of it to a freshness and a presence one had feared was lost. What could be more intimidating than Homer’s great epic, the Iliad? Yet Logue’s War Music (which collects the first three volumes of his brilliant adaptation) ‘makes it new’ with all the vigor and invention the old recountings could no longer carry. If ‘translation’ is literally a ‘carrying over,’ then War Music is a vivid and reaffirming instance of its power. First and last, Logue is a poet whose own authority here is as timeless as his master’s.”

Picture the east Aegean sea by night,
And on a beach aslant its shimmering
Upwards of 50,000 men
Asleep like spoons beside their lethal Fleet.

Now look along that beach, and see
Between the keels hatching its western dunes
A ten-foot-high reed wall faced with black clay
Split by a double-doored gate;
Then through the gate a naked man
Run with what seems to break the speed of light
Across the dry, then damp, then sand invisible
Beneath inch-high waves that slide
Over each other’s luminescent panes;
Then kneel among those panes, burst into tears, and say:

‘Mother,
You said that you and God were friends.
Over and over when you were at home
You said it. Friends. Good friends. That was your boast.
You had had me, your child, your only child
To save Him from immortal death. In turn,
You friend, the Lord our God, gave you His word,
Mother, His word: If I, your only child
Chose to die young, by violence, far from home,
My standing would be first; be best;
The best of bests; here; and in perpetuity.
And so I chose. Nor have I changed. But now –
By which I mean today, this instant, now –
That Shepherd of the Clouds has seen me trashed
Surely as if He sent a hand to shoo
The army into one, and then, before its eyes,
Painted my body with fresh Trojan excrement.’

Sometimes
Before the gods appear
Something is marked:
A noise. A note, perhaps. Perhaps
A change of temperature. Or else, as now,
The scent of oceanic lavender,
That even as it drew his mind
Drew from the seal-coloured sea onto the beach
A mist that moved like weed, then stood, then turned
Into his mother, Thetis’, mother lovelost face,
Her fingers, next, that lift his chin, that push
His long, redcurrant-coloured hair
Back from his face, her voice, her words:

‘Why tears, Achilles?
Rest in my arms and answer from your heart.’

The sea is quiet as light.

‘Three weeks ago,’ he said, ‘while raiding southern Ilium
I killed the men and burned a town called Tollo,
Whose yield comprised a wing of Hittite chariots
And 30 fertile shes.
As is required
The latter reached the beach-head unassigned,
Were sorted by the herald’s staff, and then
Soon after sunrise on the following day
Led to the common sand for distribution.
At which point, mother mine’ – his tears have gone –
‘Enter the King. No-no. Our King of kings, Majestic Agamemnon,
His nose extruded from his lionshead cowl,
Its silvered claws clasped so’ – arms over chest –
‘And sloping up his shoulder, thus, the mace,
The solar mace, that stands for – so I thought –
What Greeks require of Greeks:
To worship God; to cherish honour;
To fight courageously, keeping your own,
And so the status of your fellow lords
High, mother, high – as he knows well – as he knew well –
As he came lick-lick when the best
Met to view the shes – six with infant boys at heel –
Here sniffing, pinching here, lifting a lip, a lid,
Asking his brother: “One, Menelaos, or – or two?”
Then, having scanned their anxious faces with his own,
The guardian of our people outs the mace
As if it were a mop, and with its gold
Egg-ended butt, selects – before the owed –
A gently broken adolescent she
Who came – it seemed – from plain but prosperous ground.’

The stars look down.
Troy is a glow behind the dunes.
The camp is dark.

The following are links to other Web sites with information about poet Christopher Logue. (Note: All links to external Web sites open in a new browser window.)

Have you read Homer: War Music by Christopher Logue? Add your comments to this page and let us know what you think.