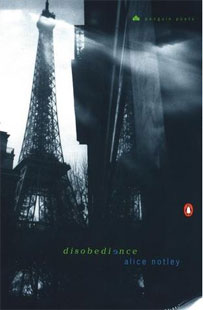 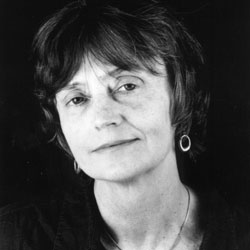 Paris-based Alice Notley is the author of more than 20 books of poetry including The Descent of Alette (1996) and Mysteries of Small Houses (Penguin, 1998). She was a finalist for the Pulitzer Prize, and winner of the Los Angeles Times Book Award for Poetry. In the spring of 2001 she received an Academy Award from the American Academy of Arts and Letters and the Poetry Society of America’s Shelly Memorial Award. She edited and wrote a new introduction to her late husband Ted Berrigan’s The Sonnets (Penguin, 2000). Born in Bisbee, Arizona, Notley grew up in Needles, California. After leading a peripatetic life during the late 60s and early 70s, she settled in New York, where, for 16 years, she was an important force in the eclectic second generation of the so-called New York school of poetry.

“Disobedience stands in ambush at the virtual co-ordinates of our ‘post-modern’ inferno. Against ‘decorous poetry,’ Alice Notley’s verse has a caustic swish, the intimacy of a vivisectionist on the contemporary body politic. In an unsentimental interrogation of the will, the soul and the common being the long poem ‘disses’ the orthodoxies of political power, sex, and philosophy. Disobedience does what only the best poetry can do in times like these, surprise, denounce, dissent.”

Alice Notley reads THERE WAS ALSO VALIUM IN THE DRINK, PLACED THERE BY TWO OTHER PEOPLE

THERE WAS ALSO VALIUM IN THE DRINK, PLACED THERE BY TWO OTHER PEOPLE, by Alice Notley

THERE WAS ALSO VALIUM IN THE DRINK, PLACED THERE BY TWO OTHER PEOPLE

you had, effectively, drugged me, but
what I saw on the drug was true
you put acid in my drink without telling me, so
I would loosen up and be fun for you
but what I saw was that the historical portraits
of fat wigged men were alive
and ranged a gamut of demonic expression.
Then I blacked out; you told me, later,
I’d said that the way my brother had died
made everything seem worthless; I’d shouted
at you that your essays on war were self-gratifying.
Oh yes, history. You said that I
should have seen his life as a speck of loss in the struggle,
immense and longterm, of an Asian nation,
a spark to balance against 20 Asian sparks –
how fucking comforting!
Perhaps you could die too, to help make enough
counter-balancing sparks? Well, who then
would write your poems, I suppose you’d say.
There was raw meat throughout the house:
I’d attacked the paintings
and only raw steak could heal them. I
can believe that. But there’s always plenty of raw meat to heal
hurt power. Think of how much there is in Asia
All those people, sweatshops, markets, all that offending
new capitalism. Better organize a special issue, a panel, on the subject
your pretty house may be in danger, from capitalism –
(you are not a capitalist, you merely own a house.) Happy Acid Trip!

Have forgotten the other you –
that sense that some other entity knows one intimately
from the inside.

Could “god” “know” a “person?”
if god is ground
god could be in a person, could be like a person

having to mimic our every idiocy.

The evening news is gratifying
Le Pen-is is fucking up
Le Pen-is doesn’t think the French
football team is really French.
He does
look like an organ, see a wee-eyed prick of a figure
bluntheaded thicknecked bald.

The man I shouted at in the acid dream
had a name that mean “white fluid.” My seeing to
embrace “black” then –
you might say that’s racist –

Language tends to be racist, exists to make distinctions,
as, likewise, do images;
but there can be a personal reality which isn’t devisive,
between words or frames.

The rifts in the world cannot be healed with language.

Though poetry modifies the divisiveness of words with
light and fluidity – true self,
raceless and sexless, burning through language’s flaws.

I don’t want to go down into the caves anymore.
I try to summon the ‘feeling’ of the caves
without a descrent into their imagery –

The crystal I’m in’s not yet as intense as previously.
Then there’s imagery anyway:
A black cowl blowing and twisted
the glass grail floats precariously on
a sinister breeze, all in a black sky

In Paris a woman scowls. Eyebrows and downdroop
mouth: she’s conveying her dress to work on
the rue du Faubourg-Poissonnière. She scowls straight at me.
She’s not a dream. I dream of an acquaintance
in another social class, as I’d perceived that in my youth,
wears a mask in three colors to speak of her own
father’s death. Black, white, rust-red
the mask shows me she’s my equal
and that both his death and that equality are what’s holy. I
wake up ashamed. I dream of the evaporation
of a relation’s beauty. She waits for me
to push her in her wheelchair, her foot is missing
I can’t tell if she’s she or my sort-of enemy
No there’s the sort-of enemy, they both look like someone else a
Ms. Fleeting, another woman, but an older Ms. Fleeting,
because we’re all older Ms. Fleetings. Or Jo Van Fleets – she’s
just died – So let’s
serve the damned meal, in the next dream please. My mother says,
the continuousness of this dinner party
as an event that isn’t divided, rigidly, into PIECES of caring
is what’s so good about it. We don’t have to
keep our services separate:
we DON’T have to have classes. of people, experience, culture
we DON’T HAVE TO take care of someone needy for
an hour at three. We are feeding everyone
period. We don’t care about your special problems.
We’re tired of thinking about who you are.
If food’s all you need – Isn’t it?

I can’t undo anything; this poem

Left a house again all night, packing up

The following are links to other Web sites with information about poet Alice Notley. (Note: All links to external Web sites open in a new browser window.)

Have you read Disobedience by Alice Notley? Add your comments to this page and let us know what you think.