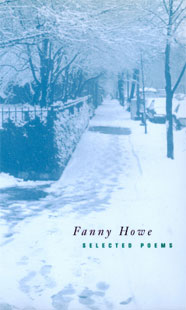 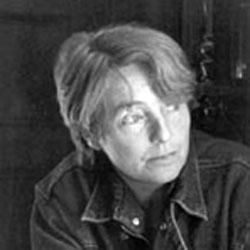 Fanny Howe is Professor of Writing and Literature at the University of California, San Diego. One of the best and most respected experimental poets in the United States, she is the author of more than 20 books of fiction and poetry, most recently, Gone, 2003. Boston is the setting for some of the early poems, and Ireland, the birthplace of Howe’s mother, is the home of O’Clock, a spiritually piquant series of short poems included in Selected Poems.

“Fanny Howe’s lyric meditations on matter and spirit, the soul exiled, and the wondrous strangeness of human life on earth are akin to Dickinson’s in their fierce wit, musicality and intelligence. Gathered from nine of her books spanning more than two decades, these poems articulate the inquisitive grace and courage of a secular contemplative, restoring to language its power to question the sacred in the interests of corporeal joy.”

Some of the others believe in food & drink & perfume
I don’t. And I don’t believe in shut-in time
for those who committed a crime
of passion. Like a sweetheart
of the iceberg or wings lost at sea

the wind is what I believe in,
the One that moves around each form

© 2000 the Regents of the University of California

The following are links to other Web sites with information about poet Fanny Howe. (Note: All links to external Web sites open in a new browser window.)

Have you read Selected Poems by Fanny Howe? Add your comments to this page and let us know what you think.